Jack Wilson is a HERO! His actions in church on Sunday saved countless lives.

71 years old, owns a shooting academy, quickly shot and killed an active shooter from about 50 ft. Saved many lives!

(I feel much safer knowing the people that I surround myself with carry!) pic.twitter.com/gb8J5GAiQh

In 2 seconds, Jack drew his firearm & fired a single bullet directly into the murderers head from 50ft

Jack says “Evil exists – My brothers in Christ will not allow it to succeed”
Jack is a hero
Be like Jack pic.twitter.com/sLiF95IJUr

Here is the entire interview with Jack Wilson.

“That’s when I was able to engage him … I fired one round.”

"You train, but you hope you never have to go to that extreme."pic.twitter.com/8g5Ebn0w1E

The man who jumped into action when a gunman opened fire on worshipers during a church service in Texas said Monday he was placed in a position he didn’t want to be in, but had to react because “evil exists.”

Two men were killed when the gunman opened fire at West Freeway Church of Christ in White Settlement on Sunday morning, as more than 240 parishioners were inside. Within seconds, he was shot to death by two congregants who fired back.

Jack Wilson, a Hood County resident running for commissioner for the 3rd Precinct who is the head of the church’s security team and a firearms instructor, shared some details on his campaign’s Facebook page as he gave thanks to “all who have sent their prayers and comments on the events of today.” 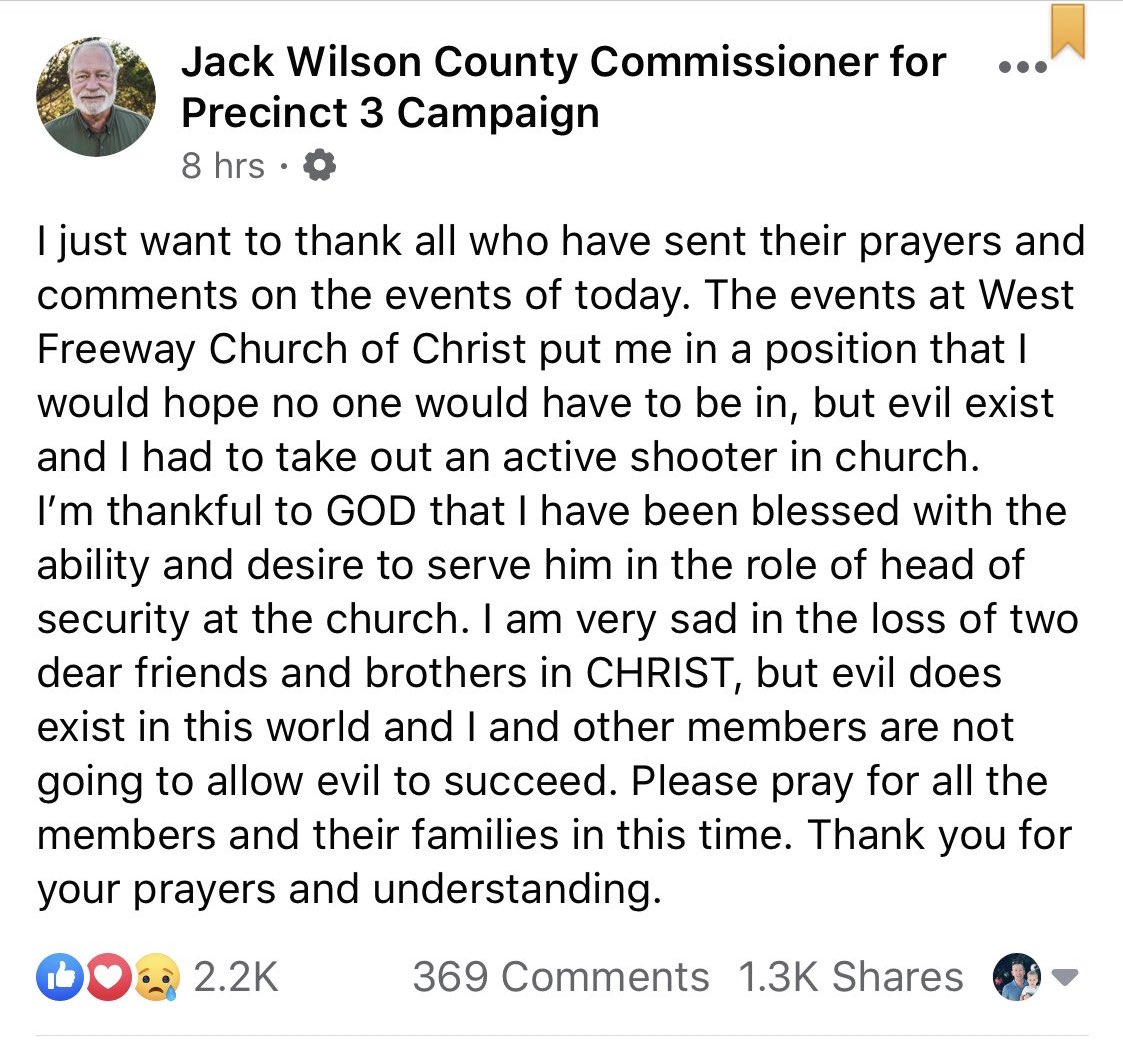 I was so happy to see our President’s tweet.

Our prayers are with the families of the victims and the congregation of yesterday’s church attack. It was over in 6 seconds thanks to the brave parishioners who acted to protect 242 fellow worshippers. Lives were saved by these heroes, and Texas laws allowing them to carry arms!

The Economic Train is closing out 2019 in epic fashion!

Nationally and all regions are higher compared to one year ago. https://t.co/yMjmnNRfhi pic.twitter.com/GTb6fsGmo2

The PHSI stood at 106.7 in October and was expected to gain slightly less than the reading. Forecasts ranged from a low of 0.0% to a high of 1.5%. The consensus was looking for a gain of 1.1%.

In October, the overall U.S. trade deficit—or, the balance for goods and services—narrowed to only $47.2 billion. Depending on services for November, the decline in the goods deficit could provide a boost to quarterly gross domestic product (GDP).

Advance numbers for U.S. exports in November, 2019 were up more than $900 million from October. With #USMCA and @realDonaldTrump's continued push for free and fair trade, 2020 could be a great year for more export growth. https://t.co/lkRdh9oJSA

The Assassin, Peter Navarro, appeared on Fox News to discusses the state of the U.S. economy heading into 2020. Sandra Smith and her sidekick try their hardest to inject BS into the discussion. Problem for them is that the Assassin was prepared for it.

The military air strikes sent a clear message to the Iranian government. When you play stupid games, you will win stupid prizes.

U.S. Special Envoy on Iran Brian Hook:
-Trump sent a message through the strikes that we do not tolerate attacks on our forces
-We will continue to apply sanctions on Iran
-We can't differentiate between Iran & the organizations funded by this regime in the region

Another video of the attack from the US military | pic.twitter.com/MwsYccj2vl

The MSM, Democrats, Leftists, Never Trumpers etc. lost their minds on Sunday when they found out that President Putin called our President to thank him for information we provided that helped foil a potential terrorist attack in Russia.

From the link above:

Both Presidents committed to continuing counterterrorism cooperation between the two countries. The Presidents also discussed the state of relations between the United States and Russia and future efforts to support effective arms control.”

Our President’s next rally will be taking place on Tuesday, January 14th in Milwaukee, Wisconsin.

.@TeamTrump is coming to Milwaukee, Wisconsin for a @realDonaldTrump rally! pic.twitter.com/vnnaV4ygaq

Our President decided to have it on the same day that the Democrats will have their debate in Iowa.

President Trump’s 2020 reelection campaign announced Monday that it will hold a rally in Wisconsin on Jan. 14 – the same evening that Democrats gather in the early caucus state of Iowa for the first presidential primary debate of the new year.

Trump will appear at the rally at the UW-Milwaukee Panther Arena in Wisconsin, a state that played a crucial role in his election 2016.

“President Trump has delivered for Wisconsin creating 37,400 new jobs, including 4,900 new manufacturing jobs and 13,800 new construction jobs,” Michael Glassner, the chief operating officer of Donald J. Trump for President, Inc., said in a statement. “President Trump looks forward to returning to the Badger State to celebrate his message of ‘Promises Made, Promises Kept.'”

Kayleigh shares what I have been saying for the past two months. Independents will decide the next election and they are NOT happy with the impeachment hoax!

“Every single public poll that has polled Independents shows that impeachment has gone south with this very key voting bloc— the voting bloc that will determine the election.” –@kayleighmcenany pic.twitter.com/I0anUwD0XG

Our President is only getting stronger!

Voter approval of President Trump has hit 50%, the magical and much-needed baselevel for reelection, and he is leading the top Democratic presidential candidates in the 2020 presidential race, according to a new national survey.

In the latest Zogby Analytics survey shared with Secrets, Trump is above water on his approvals, 50% positive to 48% negative, a key level his political team has been pushing to get him to.

What’s more, he is building support with independents, Hispanics, and women, according to pollster Jonathan Zogby.

That, added with Trump’s 51% support with millennials and 56% support with Generation X, has helped to give him an edge over the top five Democratic candidates fighting it out in Iowa.

How badly has impeachment hurt @realDonaldTrump?

Tied for "most admired man in America" with Barack Obama

RT so the Media can't ignore!

That 51% with Millennials absolutely includes Generation Z within it!

Democrats have a Generation Z problem that will only get worse over the next decade as more and more reach voting age.

We’ve spent our youth watching politicians chip away at our rights.

We will not stand idly by and let this continue."

As I visit with college students across the country, I am struck by how informed and educated they are about their rights. We may be young and inexperienced, but we know what’s going on around the world. In Hong Kong and Venezuela, we watch governments oppress their unarmed citizens. In our own country, we watch as state and local politicians exploit tragedies to pass more gun control laws. We watch New York billionaire Michael Bloomberg buy his way into power and influence across the country.

We see that overnight in Virginia, thousands of law-abiding gun owners will become felons for simply owning American’s most popular all-purpose rifle, the AR-15. Gun control advocates like to call it an “assault rifle” because it sounds scary. But they can’t even define what it is. Gov. Ralph Northam would criminalize law-abiding gun owners who don’t first seek government permission to loan a handgun to a close friend for self-protection, or share a shotgun with a buddy while hunting. Under Northam’s gun control schemes, families would be forced to store firearms according to strict government mandates that may leave them vulnerable.