The Economic Train saw what life was like under BHO. She knew that her better days were behind her. She was given the greatest gift in the world on November 9, 2016. The election of Donald J. Trump.

She has been paying him and us back ever since! She decided that her Christmas gift for our President this year would be another record high for all 3 indexes (DJIA, S&P 500 and Nasdaq Composite).

All three major U.S. averages closed at record highs Monday, kicking off the last week of trading for 2019.

The gains gave the Nasdaq Composite its eighth straight close at all-time highs, making for the longest stretch of consecutive record closes since July 1998.

STOCK MARKET CLOSES AT ALL-TIME HIGH! What a great time for the Radical Left, Do Nothing Democrats to Impeach your favorite President, especially since he has not done anything wrong!

She also decided to stuff our President’s stocking with this.

Saturday holiday shopping in the U.S. was more than $34.4 billion in sales. That’s the largest single day in the history of U.S. retail sales.

“Paced by the ‘Big Four’ mega-retailers — Walmart, Amazon, Costco and Target — Super Saturday was boosted by the best traffic our team has seen in years,” said Craig Johnson, president of the retail research firm.

Job growth and fatter wallets, along with stronger household finances, have put consumers in a buying mood this season, Johnson said. And more of them are shopping online. As retailers offer improved web platforms, online spending so far this season has accounted for 58% of sales growth from a year earlier, he said.

Builder confidence is at a 20-year high, new residential construction statistics are strong, and volatile new home sales have been steadily rising to their best level in 12 years.

All four broad categories of indicators for the Chicago Fed National Activity Index (CFNAI) increased from October and two made positive contributions in November.

Production-related indicators added +0.49 to the CFNAI, up from –0.60 in October. https://t.co/kNTMbomBd7 pic.twitter.com/8nNy7KJB2H

The Chicago Fed National Activity Index (CFNAI) rose from -0.71 to 0.56 for November, beating forecasts and indicating the U.S. economy rebounded. That jump in economic growth was driven in no small part by production-related indicators.

All four broad categories of indicators increased from October and two made positive contributions to the index in November.

The Atlanta Federal Reserve revised their GDPNow forecast for the 4th Quarter real GDP rate from 2.1% to 2.3%.

Energy Dominance has been one of the main drivers of our economy.

A big part of our economic success these last three years has been due to the booming energy sector where we have become a net energy exporter. Yet, all of the 2020 #Democrats want to destroy that progress. #DemocratsAreDestroyingAmerica #oilandgas #KAGhttps://t.co/PVPhtCcCzV

With the end 2019 only days away, it’s natural we look back at all that has transpired, both “highs” and “lows.” We do this in our personal and work lives, and, as a nation, we should do this on critical issues. Like energy.

The highs: America in 2019, for the first time in 70 years, became an exporter of oil. America is experiencing an energy boom. We lead the world in oil and natural gas production, creating thousands of high-paying jobs all across rural America. Our energy revolution, and particularly advancements in fracking, has created over four million new jobs. A report by the Heartland Institute concludes that, without fracking, our natural gas prices would be 28 percent higher today. That’s a pretty high heating bill for many American households.

Abundant, inexpensive, domestic, reliable energy is reflected in the cost of business, manufacturing, farming and industry, which translates into our economy charging ahead with the lowest unemployment rate in 50 years and wages rising for the first time in nearly a decade.  Energy helps make America great. Again.

When the Economic Train has the ultra liberal MSM talking about her, you know it is bad for the Democrats.

It isn’t, but something can in fact be quite good even without being the best ever. The unemployment rate is 3.5 percent. The stock market is at an all-time high. The poverty rate is falling. Employers have started showing refreshing willingness to hire people with criminal records because there just aren’t that many conventionally qualified people left to hire.

That’s good news for American workers, and probably good news for Trump’s reelection campaign. It also poses the question of what exactly Democrats should say about an improving economic situation — they need to find a way to make the case for change, but also to connect with the sentiments being experienced by voters.

At Thursday’s debate, there seemed to be a firm consensus among the candidates that the right path is simply to deny that the economy really is performing all that strongly.

Most indicators really are looking good these days. And that’s not just superficial ones that mask hideous problems beneath the surface.

And more importantly for political purposes, most voters are clearly saying they feel that the economy is doing well. Trying to talk them out of that might be counterproductive compared to the possibility of simply trying to argue about something else.

Today, though, there is no need for tedious arguments — the typical family’s income is higher today than it’s ever been:

And data from the job site Indeed shows that the generally low unemployment rate — plus state minimum wage increases — has been particularly beneficial to people working in low-wage industries, whose earnings have grown the most in percentage terms over the past year: 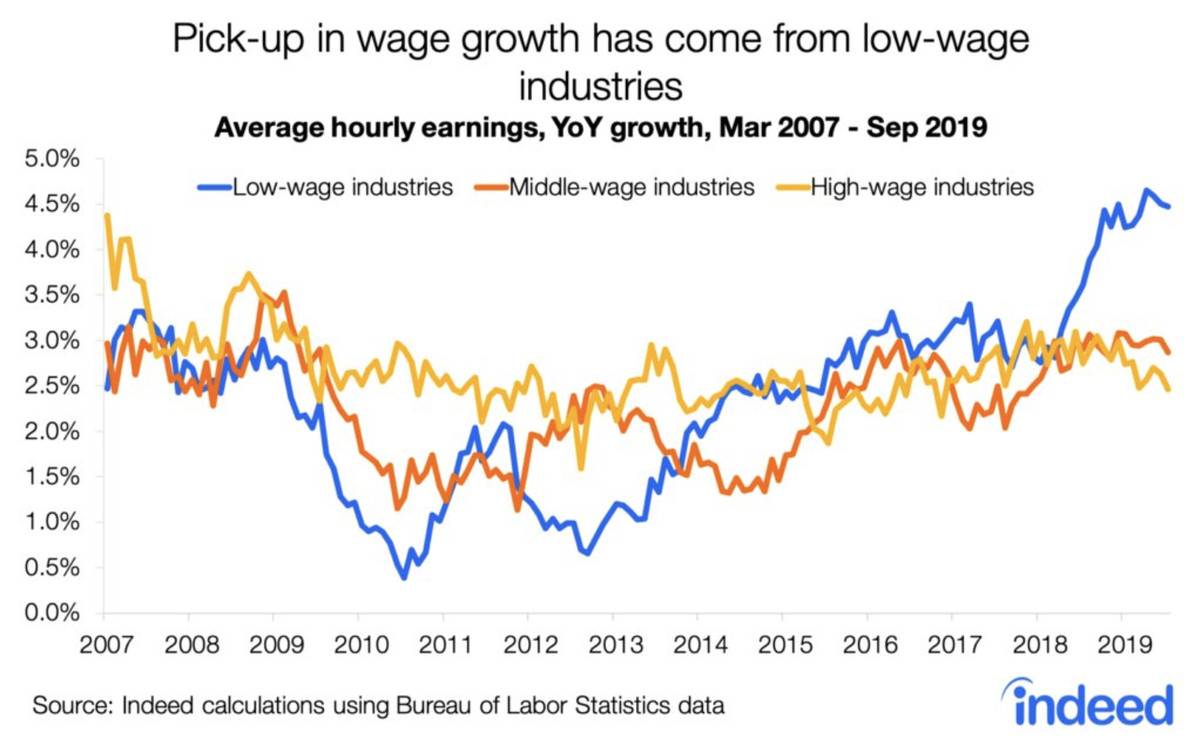 China thought they held us as hostages when it comes to rare mineral. Not so fast!

The developers of the Round Top Mountain rare earth element. (REE) mine in Texas are building a pilot plant to process the mine’s ore in the United States, according to a press release. The development means that the U.S. can further increase supply-chain security for the provision of REE minerals and critical minerals to strategic industries such as defense and electronics while reducing reliance on supplies from China—which currently supplies over 80 percent of REEs globally.

Cocaine Mitch appeared on Fox Morning yesterday to discuss the current status of the House impeachment and his perspective on why Speaker Nancy Pelosi is not sending the written articles of impeachment to the Senate for trial.

House Leader Kevin McCarthy stated on Sunday that he would recommend John Ratcliffe, Jim Jordan and Doug Collins as House members who would represent the interests of our President if any Senate impeachment trial was to begin.  All three are exceptional.

Salena Zito is absolutely right! This is what the majority of our country looks like. The Forgotten MEN & WOMEN are no longer forgotten.

“Here’s what might surprise you the most: I think America is mostly this way. At least, America is more like Everett than it is like whatever you see on cable news. You just sometimes have to slow down to see it.” https://t.co/6rpKX3jbUS

A lot of folks who look at Everett on a map might be tempted to quip that this town has been passed by one too many times to be relevant in today’s world of ascending technologies dominating every aspect of our lives.

A lot of folks would be wrong. There is an incredible heart to Everett that captivates you the moment you turn left off of the bypass road that’s supposed to help you skip the Lincoln Highway, where the center of the town hums.

No one is watching the Democrat debates. The ratings continue to sink to all time lows!

Keep it up Dems. Pretty soon you will have 0 Ratings.

People are getting tired of hearing the 2020 Democrats talk.

The ratings for their latest debate last week show it. Of all the Dem debates so far, this one had the smallest audience.

Last night’s Democratic debate, which inevitably dealt with the recent impeachment of President Donald Trump, drew just over 6 million total viewers for PBS and Politico, according to Nielsen figures.

That total, which counts the PBS broadcast and the simulcast on CNN and CNN en Español, makes it the least watched debate so far in the current cycle, only just behind the previous MSNBC debate which drew 6.5 million.

None of the Democratic debates thus far in this cycle have come near to the 24 million viewership figure posted by Donald Trump’s first debate on Fox News in August of 2015.

Syrians in Aleppo are celebrating Christmas thanks to PDJT.

Merry Christmas from #Syria’s #Aleppo, free of ISIS and Al-Qaeda jihadists. A beautiful sight that won’t be seen on mainstream media. pic.twitter.com/2RE8wIfZaT

The spirit of Christmas comes alive in the Blue Room of the White House!

The spirit of #Christmas comes alive in the Blue Room of the @WhiteHouse pic.twitter.com/hf6tE4fnNo

.@FLOTUS' signature Christmas wreaths with classic red bows hang on the outside windows of the White House! pic.twitter.com/vG5QidaXiW

2 thoughts on “News Roundup! The Economic Train Has A Present For PDJT, GDPNow Forecast Revised Upward For the 4th Quarter, Energy Dominance Is Helping To Drive the Economy, Vox Has To Admit That the Economy Is Doing Really Well, Rare Elements Will Be Processed In the U.S., Cocaine Mitch’s Interview, Doug Collins’ Interview, The Town That Wouldn’t Be Past By, No One Is Watching the Democrat Debates, Christmas In Aleppo, Christmas Comes Alive In the Blue Room In the WH…..”