Secretary of Labor, Alexander Acosta, held a press conference yesterday to make a statement and answer questions regarding the Jeffrey Epstein arrest and prosecution in Washington, DC.

Acosta was the former U.S. Attorney in Miami during a prior plea agreement.

Secretary Acosta saw this opportunity for what it was. Not only to try and save his job but more importantly to save his name and reputation. I see parallels between Secretary Acosta and Justice Kavanaugh. Both men were staring down the barrel of a shotgun.

This was his only chance to get his side of the story out and all the evidence he could provide to the MSM that were present. The last thing he wanted was for his name and his reputation to always be tied to a POS like Epstein.

To his credit, he did just that in my opinion. The State of Florida was going to let this POS walk with no jail time. The Governor at the time was Charlie Crist (who currently is a Democrat House Member).

The Chief of Police, Michael Reiter (served in that position from 2001-2009), was so disgusted with what was going on that he reached out to the prosecutor of the Southern District of Florida at the time, Alex Acosta.

From the link above:

“In 2004, Reiter initiated the first inquiry into Jeffrey Epstein and his possible involvement in child prostitution. Prior to the investigation, Epstein had made donations to the PBPD for the purchase of additional equipment needed to investigate a crime in which Epstein was the victim. However, Reiter grew suspicious of the billionaire after his officers received reports of suspicious activity around Epstein’s home—such as young women entering and exiting the home at odd hours and loitering on the block. The department launched a several-months-long investigation and gathered “sworn statements from five alleged victims and 17 witnesses.” Reiter requested that Epstein be charged with at least four counts of unlawful sexual conduct with a minor with girls as young as 14 years old. The chief also returned the recent donations to PBPD back to Epstein.

After turning the evidence over to prosecutors, Reiter was “outraged” to learn that the State Attorney’s office offered Epstein a plea agreement. On May 1, 2006, the PBPD requested an arrest warrant be issued for Epstein’s arrest, and Reiter wrote a letter to Palm Beach County State Attorney Barry Krischer, “all but demanding that [Krischer] recuse himself from the case.” At a grand jury hearing in July 2006, state prosecutors obtained an indictment of one count of felony solicitation of prostitution. Again dissatisfied by the outcome, Reiter contacted the Federal Bureau of Investigation and the federal prosecutor for the Southern District of Florida, Alexander Acosta. Reiter also sent letters to the each of victim’s parents explaining that he believed justice had not been served. Epstein, under threat of federal prosecution, agreed to plead guilty to the state charge of soliciting an underage girl for prostitution, served a 13-month jail sentence, and was registered as a sex offender.” 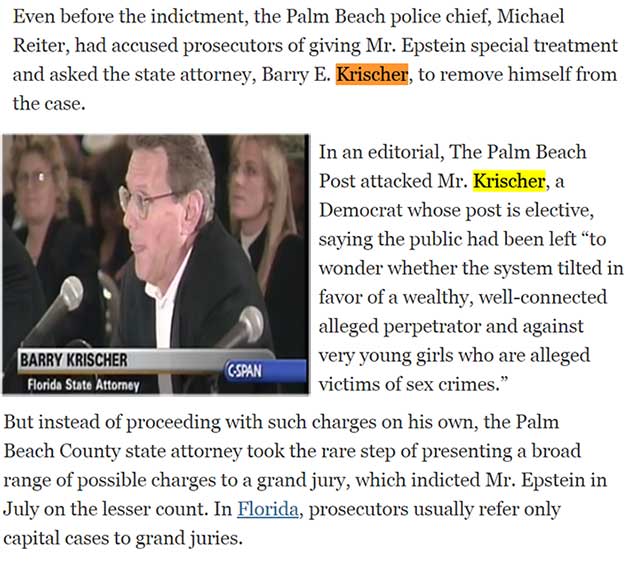 The fix was in! The Grand Jury convened by the crooked Palm Beach County prosecutor had already returned their decision on the piddly charge. It was set up this way in order for it to fail.

If it weren’t for the Chief of Police, this man was walking away with no jail time or having to register as a sex offender. There was no way in hell that the Bush Administration was going to have Acosta or the FBI go after Epstein. They knew they were protecting Bill and Hillary Clinton. Hillary Clinton announced her candidacy for president on 1/27/07 and this deal was struck on 10/27/07. Limiting the investigation was a political concern for everyone involved.

It was also the Palm Beach County State Attorney, Barry Krischer, that allowed Epstein to leave prison 6 out of 7 days a week to go to work for the 13 months he had to serve in a state prison. Not Acosta!

Alex Acosta: “Simply put, the Palm Beach state attorney’s office was ready to let Epstein walk free, no jail time. Prosecutors in my former office found this to be completely unacceptable… there was value to getting a guilty plea and having him register” https://t.co/hDKLV4RIz6

Our President has been proven right once again when it comes to the government corruption in Puerto Rico.

Yesterday, six more people were indicted under new federal charges, including two government officials: Julia Keleher, who served as Puerto Rico’s Education Secretary until April; and Ángela Ávila-Marrero, who was the Executive Director of the Puerto Rico Health Insurance Administration until late June. They are variously charged with wire fraud, money laundering and conspiracy, according to the 32-count indictment.

The federal indictment says the former officials illegally directed federal funding to politically connected contractors. The arrests come about a month after Congress approved a controversial disaster aid bill that earmarked additional funding for Puerto Rico’s recovery from Hurricane Maria in 2017, which were tied up in part because President Trump called Puerto Rico’s officials “incompetent or corrupt.”

“We’ve crossed that crucible now,” Grijalva said in interview. “The restoration of accountability is so key going forward.”

Prosecutors said Rosselló was not involved in the investigation, according to the Associated Press.

A spokesman for Rosselló did not immediately return requests for comment.

The arrests come as senior White House officials are searching for new ways to limit the amount of federal aid going to help Puerto Rico, and the island’s allies fear the arrests will give Trump greater justification for curtailing additional aid to the island.

“The governor of Puerto Rico and his administration have now given President Trump the ammunition he needed,” said San Juan Mayor Yulin Cruz, a political opponent of the governor.

They can’t hide the fact that Hispanic Americans approval for our President is continuing to grow. He only received 29% of the Hispanic vote in 2016 and still won.

The survey found 47 percent of Americans approve of the job Trump is doing in the White House, a figure that represents a 2-point increase from when the same poll was conducted two weeks ago.

In a survey of nearly 1,300 veterans conducted in May and June, 57 percent of respondents said they approve of how Trump is leading the armed forces. In contrast, about 41 percent said they disapprove of how he has handled running the military.

Our President continues to show that he cares for the well being of every single American. The EO he signed yesterday was another perfect example.

Across America, 37 million patients suffer from chronic kidney disease and over 726,000 have end-stage renal disease.

"We are fighting by your side and we are determined to get you the best treatment anywhere in the world . . . we are with you every step of the way." pic.twitter.com/3dBZLeo8aO

President Trump is signing an executive order to improve the lives of Americans suffering from kidney disease—aimed at improving kidney health and promoting increased treatment options for patients. pic.twitter.com/up8frJL9IW

President @realDonaldTrump is determined to provide Americans suffering from kidney disease the best treatment in the world.

As the President spoke, my mom was connected to a dialysis machine. She’s currently waiting to find a kidney for her 5th transplant.

30 million Americans suffer from chronic kidney disease. These new approaches to care will change lives for the better.https://t.co/WEuNAIddiC

Once again our President through his efforts was able to save 500 jobs in Pennsylvania.

Great reversal of fortune for 500 workers and great news for Chester County—last month it was announced the Sikorsky’s helicopter plant in Coatesville would bevclosed by the end of 2019. https://t.co/DHy8rm7Ac8

….Thank you to Lockheed Martin, one of the USA’s truly great companies!

Ford announces a major investment in two of its plants in Chicago.

In late June, Ford unveiled the fruits of a one-billion-dollar investment in two Chicago area plants responsible for producing the Explorer SUV, as well as its specialty law enforcement vehicle, the Police Interceptor, and the upcoming 3-row Lincoln Aviator.

Ford says it will also add about 500 jobs, bringing the total number of human workers between the two plants to about 6,500 – running three shifts, 24 hours a day. Ford also said it dedicated about $40 million towards making these factories better places to work, including renovating break areas, bathrooms, and adding LED lighting and security improvements.

I absolutely LOVE AOC! She is truly the gift that keeps on giving. This is going to be epic to watch. Grab your popcorn!

Ocasio-Cortez Suggests Pelosi Is Targeting Her Because Pelosi Is Racist https://t.co/GKrPSgWCvn

Socialist Rep. Alexandria Ocasio-Cortez (D-NY) attacked House Speaker Nancy Pelosi during multiple recent interviews, going as far as to say that she believes that Pelosi is targeting her because Pelosi is racist.

“I think sometimes people think that we have a relationship,” Ocasio-Cortez told The New Yorker Radio Hour. “Not particularly.”

“The last time I kind of spoke to her one on one was when she asked me to join the Select Committee on Climate Change,” Ocasio-Cortez continued. “I was assigned to some of the busiest committees and four subcommittees. So my hands are full. And sometimes I wonder if they’re trying to keep me busy.”

Ocasio-Cortez suggested to The Washington Post on Wednesday that Pelosi was a racist: “When these comments first started, I kind of thought that she was keeping the progressive flank at more of an arm’s distance in order to protect more moderate members, which I understood. But the persistent singling out . . . it got to a point where it was just outright disrespectful . . . the explicit singling out of newly elected women of color.”

According to a recent release from the U.S. Energy Information Administration, distillation capacity has set a record high of 18.8 million barrels per day, beating the previous high of 18.6 million set in 1981. There were slight capacity increases in six of the past seven years.

God bless this coach and the entire sport of hockey! They absolutely get it.

HOCKEY COACH: If anybody is going to disrespect the national anthem, ‘get the f—k out.’

This is a man who has integrity and is coach of the year in my book! #FixIt pic.twitter.com/IcEuCIoO2W

Meanwhile the Democrats, MSM, Liberals etc. have these women they can lookup to.

This clown has zero respect for anyone but herself. Dropping F bombs 💣 on live tv. Can’t buy class! pic.twitter.com/dhhn994GlQ

And here, I will leave you a quote by the late, great Margaret Thatcher:

“Being powerful is like being a lady. If you have to tell people you are, you aren't.” pic.twitter.com/IGBC53yNQb

Here is the video that was deleted of US women's soccer player behaving like a complete and total trash individual. #USWNTParade pic.twitter.com/acdUfILU57

They don’t deserve to step a foot in the White House!